This was, like, ten years ago, still makes me nervous thinking about it although I was a bit of a hero on a message-board for a bit when I retold it. This is that retelling

Last August my mate Sam got married and he chose me to be the best man. I didn’t mind and thought it would be a bit of a laugh. I’d actually known the bride for a lot longer as she used to go out with one of my mates from school.

Anyway – I wasn’t worried about the speech, I’m a funny guy, I wrongly thought to myself, I’ll think of something.

With about two weeks to go to the big day I started to think of what to write. I’d only known the groom for a couple of years, we’d met in France when we were both racing bicycles there. Well, he raced – he was really good – and we, me and Andy Hamon, drank and smoked his winnings.

I tried to think of something amusing that had happened that I could use as the main points of my fantastic speech. I struggled a bit as the groom didn’t do too many crazy things.

Two things did stick in my mind. One day the Sam had said to me, out of the blue, that he would like to see a blonde girl shagged by a horse. The other thing he said was that he first got an erection while climbing a gym rope at school. I don’t know what we were talking about to reveal that. Probably Ninja Warrior.

A blonde shagged by a horse? That’s very specific, I thought, with the hair colour. It’ll be hilarious to retell that tale!

He may not have ever said it, thinking about it.

By the time the wedding neared the story about how he’d like to see a blonde girl shagged by a horse had become embellished to involve an elaborate harness that an unfortunate lady gets into and gets strapped under a horse.

So I wrote out this speech and felt it was lacking something. That je ne sais quoi. It needed a tape recording of the groom and some girl playing around with a horse that was supposed to have been recorded the night before the wedding! Of course! I got Andy around the week before and we made a recording on this here *computer.

A few things about the groom. He snored really strangely, like he was being strangled. He was from Bristol so he talked like a fucking bumpkin and he worked in a car park.

So this recording we made started off with the sound of him snoring and saying things in his sleep, things related to horses and parking tickets. Then you hear a door open and a girl’s voice asking the groom if she can get into bed with him. Then you hear them starting to get it on even though the groom is protesting, because he’s getting married in the morning! You then hear the groom talking about this harness he had invented and asking the girl if she would like to try it out. The girl protests but then agrees. You hear a clearly distressed horse and the girl shouting, ‘Ahhhh, my poor fanny!’

We made it with proper sound effects from the internet. I still have it on my computer.

So this recording was put onto a CD and it was to be the finale of my magnificent speech. All week prior to the wedding my girlfriend was saying ‘you can’t play that.’

Andy who had helped me write it was to be head usher and he reassured me. ‘Of course you can, I’ll laugh anyway!’

I was thinking to myself how bad could it be? you know? When you worry about something it’s never as bad as you fear.

The day of the wedding came and we started drinking early in the morning. The wedding happened, I guess, and we went to the hotel for the reception. I still wasn’t really nervous.

Going into the meal everybody that was involved in the wedding had to do a line up and talk to all the guests as they entered the dining room. It was here I started to get worried. I didn’t know anybody, nor did the groom. It was mainly the bride’s old relatives from Scotland.

I’d sort of thought that all the guests would be young and friendly. Don’t know why I thought that.

So we sat down for the meal. I was warned by the bride’s mum not to say anything bad. She meant anything bad about the bride and her previous boyfriend, my other mate. I had nothing written about that so I felt okay.

I was asked by the Maid of Honour to introduce her after my speech as she would like to say something. ‘No problem!’ I said.

The speech was to take place after the meal but my appetite had vanished and instead I just drank and became more nervous and drunk. By the time the meal finished I was very drunk indeed.

All of a sudden I’m being introduced. I got to my feet and I’d forgotten everything I was going to say. I had to search for the speech in my suit jacket.

I knew how I wanted the speech to go. I was going to allude to the bit about the horse but not say it outright. I didn’t want to offend anybody. I’m not a dick.

I was too drunk though. Just too damn drunk.

I think the first thing I said was, ‘sam said to me he’d like to see a girl shagged by a horse.’

It’s not supposed to be like this, I was thinking.

‘Shut up and sit down,’ said the bride’s mother, quite rightly.

But I was backed into a corner and I was getting angry for some reason.

I turned to the groom. ‘You fucking did.’ I told him.

I then turned to the audience ‘He fucking did.’ I slurred.

A few more people were telling me to sit down.

‘Fuck off!’ was the only reply I could think of.

I saw my girlfriend stand up and walk out. I slurred some other stuff, God knows what and eventually played the CD we had made.

There may have been a snigger at the ‘Ahh my poor fanny’ bit. It might have been in my imagination.

I was annoyed. I turned to the Maid of honour and said ‘top that if you can’ and collapsed onto my chair.

The usher, Andy, who had promised to laugh, hadn’t.

My girlfriend had walked out of the speech because she was too embarrassed for me. The photographer, not knowing who she was had said.’ I’ve been doing weddings for 20 years and that was the worst speech I have ever heard.’

Later the bride’s mother had come up to my girlfriend and said ‘I’m going to find out where you are getting married and ruin it.’

I soldiered on through the rest of the day, everybody there did their best not to make eye contact with me, but it still haunts me.

The bride’s Scottish granddad took me aside later in the evening. I thought he was going to kill me. ‘I really enjoyed your speech’ the deaf old goat said. So, this was a year ago. I haven’t spoke to the bride since although me and the groom are friends again.

The usher is getting married in October and asked me to be the Best Man. You should see how nervous his girlfriend is! And her dad has gone on record saying he will kill me if I pull any stunts.

*Me and my then girlfriend – *now wife – **now dead wife actually travelled to Fiji to get married. Not specifically because of the threats but just to be safe. Alas the recording and the computer has long gone. I hope. Here’s a picture of me on the day, post speech. Clue, I’m not the happy looking guy, that’s Damo, he was fucked. I’m the other guy. 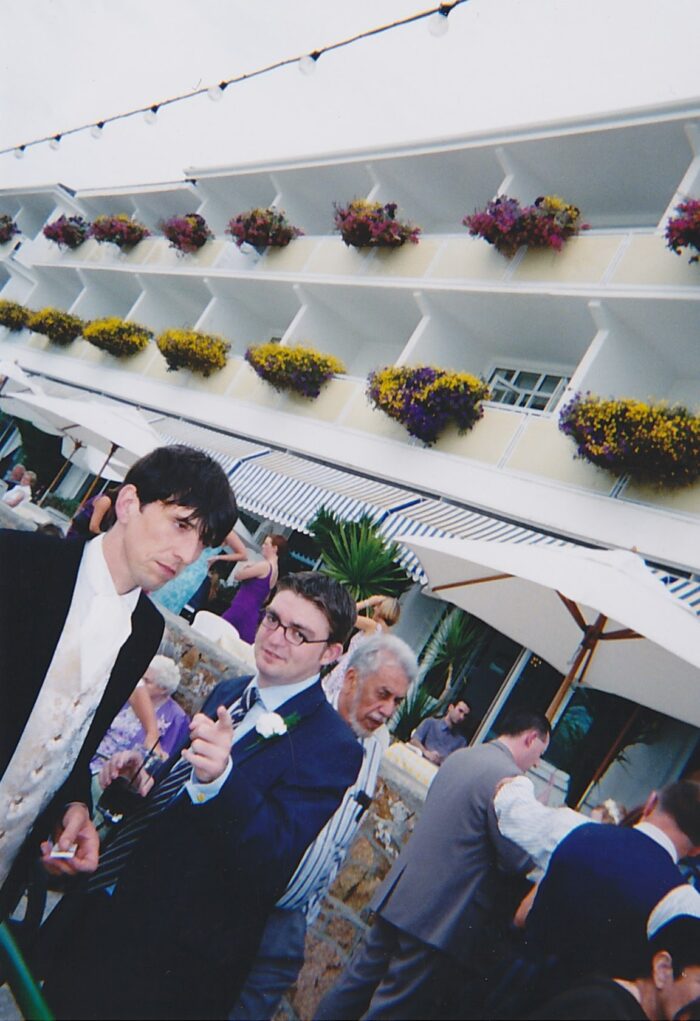